“When they come to us they can be at rock bottom. It’s about building them up.”

As the snow thawed and the daffodils began to emerge, we met with Trudy Fisher, project co-ordinator, at Action for Children Cymru. Amongst other things, Trudy runs The Youth Support Team which proceeds from Steve’s Ultra Challenge in April will go directly towards. Working in RCT, The Youth Support Team works with young people ages 16-25, and is one of only 2 organisations offering Floating Support services within RCT working with under-18s .

Most of the young people have just come out of the care system, some have been homeless, sofa surfing or living in hostels. There is no one-size fits all – each young person comes to the programme with their own set of circumstances and experiences. What they do all have in common is a need for support, whether that’s with housing, financial applications or mental health- “We’re there to speak on their behalf. Many of these young people don’t have the skills or the confidence to speak up about the issues they’re facing.”

Often the young person will only the have the clothes on their back, they may not know anyone locally and have no family networks.  The Youth Support Team will help by providing them with an emergency bag, or starter pack, and help them set up home once they have secured accommodation. Care packs include basic toiletries like shampoo, conditioner, deodorant, wet wipes, hand towels, sanitary products, razors, shaving gel, toothpaste and other necessities – these basics mean that young people can arrive at job interviews feeling presentable and confident, something most of us take for granted. 50% of proceeds raised through Steve’s Coastal Ultra Challenge will go directly towards these starter packs and emergency supplies, as well as to replenishing stocks like saucepans, hoovers, cutlery, tea towels and so on. The other 50% will go towards other projects.

The Youth Support Team also support service users to retain their tenancy as well as offering them advice and support with budgeting, form filling and access to employment and training.

Trudy emphasised the difficulties the roll-out of Universal Credit could have on the young people, who may have to wait up to 6-8 weeks to receive any funds, potentially resulting in weeks, or even months, in a property without being able to put the gas or electricity on. Universal Credit and other financial support applications can be overwhelming and complex, particularly so for those who are vulnerable – Trudy and her team are able to walk with service users throughout the process. It’s not about hand-holding, but rather about empowerment. “It’s about empowering them, giving them the skills and offering them the support they need to be able to get to where they need to be by themselves.”

Unfortunately, budget cuts have meant that 2-year support schemes have now become 12 week interventions, but Trudy is quick to point out that the support team will never turn anyone away. “We’ve got people who call us 3 or 4 years on asking for help with particular situations,” she says. “We’ll always give them that support where we can.”

Trudy told us about a young woman who’d needed support to remain in her accommodation, she was  suffering from mental health issues and fleeing domestic violence , with support she accepted a place at University, fallen seriously ill and dropped out, then regained her place before moving out of the area. Action for Children Cymru continued to support her throughout her time at University. She also shared the story of a young man who was supported to gain an apprenticeship, training to become an engineer and managed to become financially independent by his eighteenth birthday, and of a young mother who now describes herself as ‘strong,’ ‘confident’ and ‘proud.’ There are ample case studies, as well as dozens of testimonials from young people who have benefitted from the support services in numerous ways. All the staff are obviously proud of the achievements of those the charity have supported, and rightly so – “It’s nice to see how far they’ve come. The future’s bright for so many of them now and that’s how it should be.” 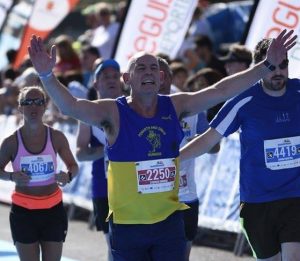 Before you go… Steve is taking part in the Vale of Glamorgan Coastal Ultra Challenge this year to raise money specifically towards the services provided by the Youth Support Team.  The 18.5 mile race starts at 10.30 at Porthkerry Park, Barry, on April 7th. Before then, Steve is hoping to raise £500 for Action for Children. If you’d like to help, you can donate via Just Giving, or send Steve a message of support and encouragement via Facebook or Twitter.