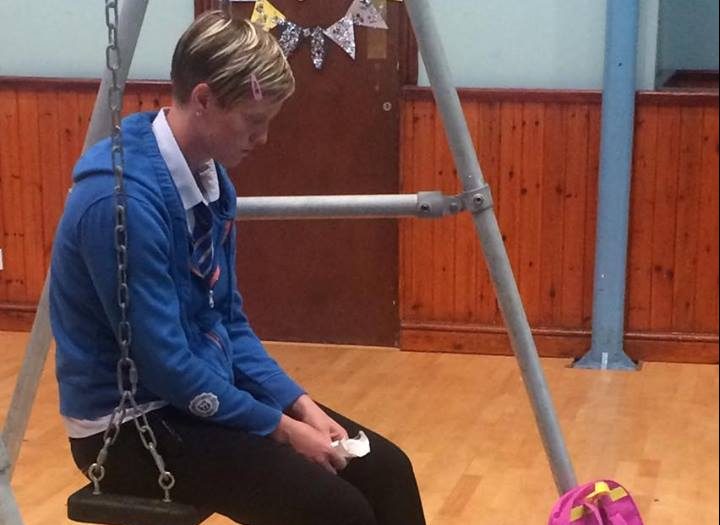 Last week, Steps Training arranged an evening performance of Spectacle Theatre’s show ‘Special,’ for an audience made up of the members of Mark Jermin’s Theatre School. ‘Special,’ a play by Paul Swift, is a story about friendship, bullying and not fitting in.

“Our goal is to enable young people and communities to begin to identify bullying behaviour. The project is particularly suited to engaging with hard to reach groups and in developing confidence and empathy,” – Spectacle Theatre

Spectacle Theatre is run by experienced drama facilitators trained in child protection and working with vulnerable adults. They design plays and workshops which aim to engage, to work with and ultimately for participants to take control of their own learning.

‘Special’ comprises of an interactive play and workshop suitable for people aged 11+, a resource pack for follow up work and two apps including a quiz app. The performance itself was dynamic, engaging and relevant. Performed on either end of the group who were sat in two rows, with plenty of movement between the two spaces, Carys and Steve embodied Megan, a young girl, and Terry, a man with learning disabilities. The dialogue between the two was intense and captivating, littered with adult language and derogatory terminology. ‘Bloody stupid,’ ‘absolutely mental’ and ‘spaz’ were just a few of the terms used to describe Terry, all words his character boldly claimed you ‘shouldn’t say,’ but sadly all words that feature far too often in daily vocabulary.

As the play goes on, the characters bond over body image and music, despite being seemingly worlds apart in both age and lifestyle. This element was heart-warming and plenty of laughter was had by all involved! However, the script became darker as the story progressed… “Tom says that all the girls send pictures of themselves to their boyfriends,” and “Of course she’s gonna get bullied. It serves her right for being so stupid,” were just two troubling lines that stood out to me.

Encompassing lessons about misconceptions, prejudice, judgement and learning to stand up to friends as well as bullies, I found the play genuinely emotional and hard-hitting.

The workshop following the play explored the thoughts and feelings of the group. The children were all engaged and willing to enter in to discussion with the team. They all had varying perceptions and interpretations of the performance regarding what had unfolded, and also regarding the way they would react were they placed in a similar situation. It was interesting how many members of the audience felt that although Megan’s actions towards the end of the play were wrong, they were equally understandable. I think it would be fair to say the majority of audience members, myself included, recognised the effects of peer pressure.

Certain members of the group had suspicions regarding Terry’s character, with some under the impression that he was lying about his learning disabilities. This thought hadn’t even occurred to me, and hearing the young people’s doubts caused me to wonder whether or not adolescents are naturally more cynical these days, or more inclined to be aware of potential predators? The group were advised to speak with trusted adults over keeping potentially dangerous scenarios to themselves, but overall seemed fairly clued up.

Being members of a drama troupe, the audience were all happy to perform and interact, playing out their own scenarios, always assured by the team that there was no ‘right or wrong,’ but rather individual ideas and interpretations. Some told stories of their own experiences, and more than a few spoke of friends with similar conditions to Terry. I was impressed by how well-traversed these young people were in the techniques needed for calming their vulnerable peers.

Ultimately, the evening was a successful blend of quality writing, dynamic performance and innovative use of space, fuelled by important messages about bullying, staying safe, judging others and exploring our own unconscious prejudices.

Special can be booked by contacting special.spectacletheatre@gmail.com. The team require a large space, a changing room, a place to leave their van and a member of staff to remain present. The rest will unfold over an hour or so, with the team and participants reading the spaces between people and hearing what isn’t said.