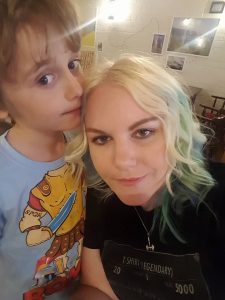 Kat heard about Autism Puzzles through a friend whose son is in school with her eldest child, Matty. When Matty was going through the diagnostic process, Kat began attending Autism Puzzles’ weekly Jump sessions as a way to interact and share with other parents.

“It meant I could talk to people about what was going on with Matty, and there was always someone there who had been through it too. Even if they hadn’t been through the exact same thing, they’d understand where I was coming from.”

Before he was diagnosed, Matty wouldn’t sleep at night, which Kat found incredibly difficult. Other parents at school, those with neuro-typical children, were prone to comparing her experiences with their own sleepless nights, but of course caring for a child with autism is entirely more complex. Parents who were members of Autism Puzzles understood that all conventional routes had been tried and were able to suggest alternative and more unique solutions to Matty’s sleeping problems.

Because her youngest child also has additional needs, Kat has had to leave work, and has consequently been able to attend more Autism Puzzles workshops. Members can attend workshops, such as Occupational Therapy workshops, which could otherwise cost up to £150 a time, free of charge. “For a lot of our families, myself included, it’s the only way they’d be able to do it.”

Piecing together a community

Kat feels the primary benefit of Autism Puzzles for her is its vast support system. “The main thing about Autism Puzzles is that they are my family.”

When the boys were younger, Karen, Donna and the other parents, were Kat’s key network of support, caring for her and each other like a close-family. 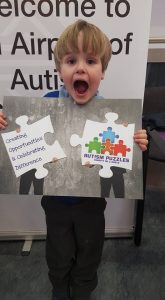 “Karen and Donna are very supportive,” Kat says. “They can give advice about the things going on in school, which issues to bring up in appointments with teachers. I can be quite blinded by my emotions, and they help me take a step back and work out what I need to do. They’ve even offered to come to school meetings with me.”

Now that both her children are in full-time education, Kat volunteers for Autism Puzzles, wanting to give back to the charity. “Everything about AP is all to do with giving back to families.”

This is the difference between Autism Puzzles, a small charity founded and run by two women who have been through the same issues as their members, and bigger, more mainstream charities. All volunteers and members have children who fall somewhere on the spectrum, and many are on the spectrum themselves, meaning Autism Puzzles comes with an in-built level of empathy that wouldn’t be found elsewhere.

“It takes a village to raise a child.”

For the children, as well as for Kat, Autism Puzzles has been a lifeline. Matty lacks confidence due to his hypermobility and weak muscle tone, but is now able to play in the Jump and Park sessions. Because Autism Puzzles offer exclusive use of the venues they hire, the children don’t feel rushed and are able to explore in their own time.

Kat says that Matty’s confidence has now improved dramatically – “It’s lovely to see him being himself.”

If Matty, or any of the other children, are having a difficult day and choose to sit under the table or engage in another coping mechanism, they are able to do so without fear of judgement.

“Both of my boys love being part of AP and both of them have benefitted massively.”

Putting the ‘Fun’ in Fundraising

As well as running their own fundraising events such as store launches and auctions, and encouraging the public to put on events, Autism Puzzles are our Charity of the Year 2016/17. This means we have committed to raising a minimum of £2,500 for them before March next year.

Last weekend, we climbed Pen y Fan along with a large group of participants, including Stephy, a woman from Singapore who happened to be visiting Wales and came along for the journey! A picnic at Garwnant, which was kindly sponsored by indycube, revitalised us after the tiring climb, but we’re not done yet!

Next weekend, our director Steve is running the Cardiff Half Marathon. He is currently training hard having set himself the task of completing the run in under 3 hours! You can support Steve’s run and donate to Autism Puzzles online using BT My Donate.

We’d like to say a huge thank you to Kat for sharing her story with us. She is only one woman in the midst of a charity who helps so many. For more on Autism Puzzles, their activities and fundraising events, see their page on Facebook.